Cosplayer of the week: Castiel – Angel of the Lord Cosplay Interview

Castiel – Angel from the Lord Cosplay known for his awesome Cas from our favourite show Supernatural starring Misha Collins, Jensen Ackles and Jared Padalecki, shares his love of Supernatural, who he ships and how he made those magnificent wings!

How did you get involved in the crazy world of cosplay?

Many years ago, when I was but a child, I was obsessed with films like Star Wars, Indiana Jones and Back to the Future. I grew up watching these things and thinking to myself that I would love to be these characters. Around 2004 I began to study media and fell in love with costumes, film and television. Not long after this I learned more about conventions and events around the UK and signed up with a local Sci-Fi club to help raise money for charities at these events. I continue to do this with many clubs and for many charities. My main page is obviously Castiel on Facebook but my main group is The TARDIS Time Team Assemble. 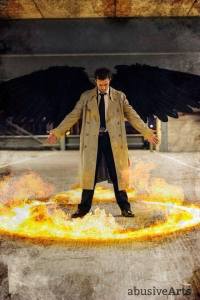 Most will know you for your Castiel (Supernatural) cosplay, why did you choose to cosplay him?

I had not heard about Supernatural until April 2014. A friend of mine kept telling me that I would enjoy the show, and she was not wrong. I watched 8 seasons in a month, immediately fell in love with the characters, plot and the actors. When Castiel came into the show… I knew he would be one to watch. I decided to take a chance and put his costume together and haven’t looked back since.

How did you make the wings for this cosplay, were there any challenges in the process?

The wings were a labour of love. I am not the first, or the last, person to make wings for a Castiel costume. I began making the wings pretty much as soon as I ‘found’ Castiel but it wasn’t until June that I managed to get them together. Another Castiel costumer had made some very nice wings and he was kind enough to give me a few tips on a couple of the elements that would help me (backing material and feather cutting). The wings are made from PVC plumbling/bathroom tubing, black bedding sheets, cotton, real turkey feathers, craft feathers, satin lycra, wood, bolts and a shed load of hot glue. The main challenge for me was getting the wings to open and stay open on their own. I actually made 5 different versions of the opening pulley device before reverse engineering an umbrella to create a “clipping” and “locking” mechanism.

Dean. Remember I said I immediately fell in love with Dean? Well… I did raise him from perdition.

Are you a Cas and Dean shipper?

I’m not really all that fond of the whole “shipping” thing but I know many people enjoy it. I’m all for free speech, thought and fan fiction for sure though! With that being said, when it comes to “shipping” I am always happy to flirt with Dean. I just feel they are more likely to be friends that love each other rather than men who are IN love with each other.

Have you been watching the new series of Supernatural?

I have of course been watching. I am not currently 100% up to date yet though. I tend to allow myself to fall behind in watching them so when I get time to watch them I have two or three to watch. I think we are all so used to being able to just watch shows back to back that when it comes to episodes at a time… it just gets frustrating! The season is great so far… although I do feel they missed a trick with DemonDean though. Spoilers so I won’t explain.

Have you met any of the Supernatural cast?

I have been lucky enough to meet Curtis Armstrong (Metatron) and Amanda Tapping (Naomi). They were both amazing. They we so very sweet and both up for a good chat about the show. It was quite amusing though because I had photo shoots with both of them individually. Each time I had to explain to them what I was going to do. “Excuse me Curtis… I am about to unfurl and extend my wings… would you be kind enough to take a small step forward as so I do not take your eye out with a feather?” Haha. They were very eager to see what I was talking about and I do not think they were disappointed.

Do you think it is harder for male cosplayers to get recognition for their craft?

I don’t think it’s a case of it being harder for males over females. I have not come across a situation where any of my male friends have felt less than female costumers. My friends and I pride ourselves on not only our costumes but our work with the public, children, charity organisations and costuming clubs. We do not really look for recognition or fame or attention. I think these days it’s a very even split with male and female costumers. 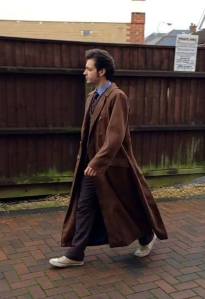 What can we find you doing outside of cosplay/conventions?

Outside of my costumes, by day, I am a primary school teacher. I teach 8/9 year old children in a school near London. I spend most of my time teaching and my spare time I spend on playing the guitar, the blue harmonica, watching films/TV shows, playing games or building costumes. I occasionally lend my voice to voice acting projects (mostly minor things on YouTube here and there) and my main passion is costume distressing/prop weathering.

Can you reveal any future cosplay plans?

My ‘current’ costumes include Indiana Jones, Castiel, The Tenth Doctor (David Tennant – Doctor Who), The Eighth Doctor (Paul McGann – Doctor Who), Rick Grimes (Walking Dead) and Sherlock (BBC). I am now piecing together a Captain Jack Sparrow costume from Pirates of the Caribbean – Curse of the Black Pearl. It’s taking a long time, a lot of weathering, distressing and love, care and attention. 2015 is going to be a great year. Savvy?

Remember to follow Castiel – Angel of the Lord Cosplay

2 Responses to Cosplayer of the week: Castiel – Angel of the Lord Cosplay Interview